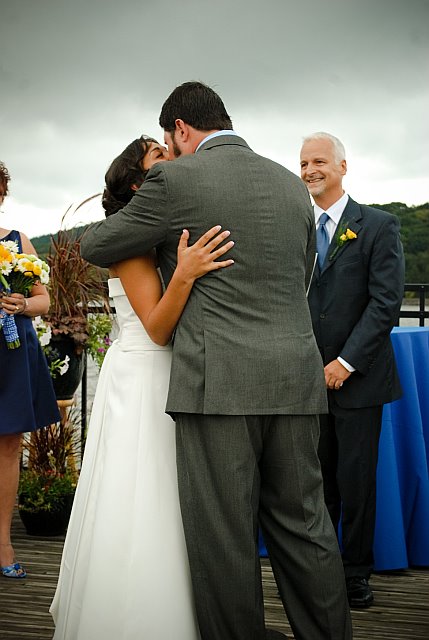 In June 2009, Jack was visiting his home in the Mid-Hudson River Region in New York State.

The day before he flew back to his Swiss residence, his niece Carly and her fiancé Terry asked Jack to be the officiate at their wedding that September.

“I was absolutely honored,” Jack said.

“As I started preparing, I realized this was probably the most complex public event I had ever performed, let alone organized… with so many people to manage and so many things to say,” Jack says.

“I broke into a cold sweat.”

So Jack got Carly on the phone. It helped that Carly was an event organizer at that point in her career, and they got right to work. Within an hour, both uncle and niece were seeing the light.

Three months later, it was close to being ready.

“The wedding was on a Saturday. I flew on the Wednesday before, and two days before that, on the Monday evening, my Toastmasters club gave me 25 minutes to do a mock run. The preparation and planning to that point had paid off, but in the mock run, I could see and feel it was far from perfect.

“In typical fashion, my fellow Toastmasters gave me great feedback and pointed out some flaws… and I knew they were right. I even had my own notes of discomfort, in addition to theirs.

“So often, people feel funny rehearsing in front of a simulated audience.

The wedding was blessed with lots of love, lots of sun on the banks of the Hudson River, and a beautiful bride and groom. What a day… for an entire extended family and scores of close friends!

“My dad was a highly accomplished NY State trial lawyer during his career. He came up to me right after the ceremony and said, “You’re a natural!”

Touched by the loving comment, and relieved by the successful outcome, Jack got emotional, but held back the tears.

“Hey Dad, you’ve always said that public speaking is both a talent and a skill, but that the real game-changer is preparation. So maybe it all looked natural, but this took a lot of preparation.”

“I completely lost it at the moment,” Jack recalls.

A few minutes earlier, Jack had been the poised master of ceremonies. But now, he was off to the side, crying his eyes out.

Since then, Jack has officiated several weddings and MC’d dozens of special events. But he manages to hold back any tears.

Do you want to cry your eyes out, with joy, after a smoothly curated, important event?