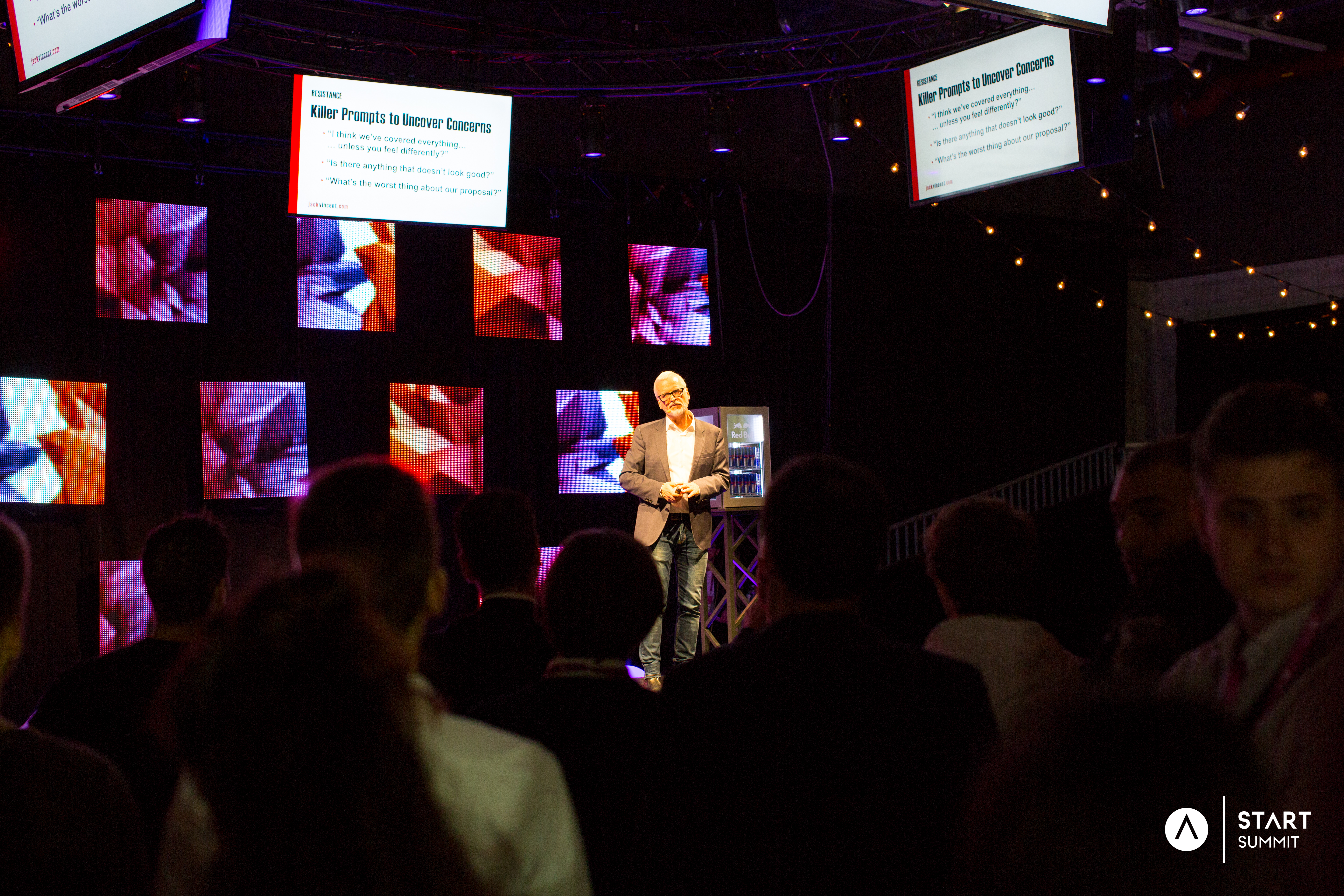 Conferences and events can be great…

… even if they have a mediocre speaker here and there.

But if the Stage Host or Master of Ceremonies is mediocre, the entire conference will lose its charm, its perceived value to the attendees.

And this will impact the perceived value of the following year’s conference.

It’s not an easy job. It takes more than good public speaking abilities and carisma.

It takes preparation and an obsession to making everyone else look good… great, in fact.

“Jack, you’re the Main Stage Host and Back Stage Coach!”

The START Summit is arguably the foremost startup conference in Central Europe, organised by the University of St. Gallen Business School, specifically by grad students.

Speakers are invited from around the world, and include Silicon Valley startups, international investors, and high-profile business gurus.

Most of the students have only limited experience from the year before and, although committed and bright, it’s new each year.

This past year,  the stage manager approached Jack during the first afternoon of the two-day conference.

“Jack, you’re a phenomenal host, but that’s not all.

“You’re the Main Stage Host and the back stage coach. Without you, this morning would have been a mess. How do you walk on stage so calmly?”

The answer in one word: “Preparation.”

Jack was brought on in January 2018 to help the 30 startups who qualify to prepare their pitches at the July startup event.

“No regional government has such a a strong initiative as the Basques,” said one knowledgeable investor.

After five months of preparing the 30 startups, and a month before Demo Day itself, BIND 4.0 asked Jack to host the Main Stage.

He did so with touches of Basque, while also mixing it with English and Spanish.

“We see Jack as the perfect host,” said the organizers, “because the startups value him, he understands the international business and startup environment and he knows Spain and the Basque region so well.”

At the conclusion of 2018, Jack was asked to return both as Pitch Coach and Main Stage Host for 2019, which was an even bigger success.

One startup said to the organizers, “For me, the best part of the program was Jack’s coaching… and then for him to introduce me on to the stage was just incredible energy.”

In November 2010, Jack was the Chair of European Toastmasters Humorous Speech Contest in Barcelona.

For the first time ever, the Contest Chair warmed up the audience with two minutes of humor, poking good fun at the Catalans/Barcelonés.  Jack then held a tight competition, followed by a warm, professional interview session with each of the contestants and the award ceremony.

Irina Kremin of KGS Global was in the audience in Barcelona.  She immediately hired Jack for various KGS conferences, such as B2B Social in Amsterdam and InnoCos Digital in New York.

“Jack’s delivery is so smooth, partly because he simply enjoys himself on stage, but also because his preparation is second-to-none.  There are never any awkward moments between speakers or coffee breaks.

“Weeks before each conference, he reaches out to the speakers, establishes great rapport and confirms their introduction points.

“If there are ever any small, logistic problems, Jack adjusts quickly.  Once, when our next speaker was in the WC, Jack seamlessly shifted and held an informal yet relevant survey with the audience.  I later learned that he had that survey in his ‘back pocket’ for just such a moment.”

Jack also hosts and curates TEDx events over the years, TEDxLuzern, Zug and this year in Lugano (all in Switzerland).  Not only does Jack prepare himself for the hosting role, he often curates the program and works with each speaker to move their TEDx Talks from good to great.

“I simply get a buzz watching many interesting people with great content bring it to a higher level in their structure and delivery.  Oh, and I get a buzz hosting, too.  A real buzz.”

“The best way to get the audience to have an enjoyable experience is for me to enjoy it!”

Contact Jack to see how he can bring your event from good to great.