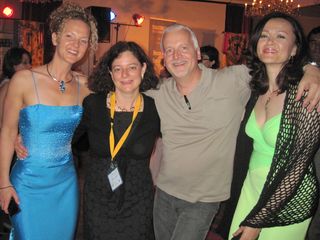 It’s a tough job, but… you know how it goes.

I’m just back from the Toastmasters District 59 Spring Conference in The Hague.

Also a great mix of workshops.  Paul Rulken’s “Mastering Black Belt Communication With Any Executive” was a cracker.  I don’t say that because Paul cited my “Selling in the Brave New World” workshop of the day before, although it is fair to say that Paul and I really clicked.

Had Paul presented before me, I would have certainly cited some of his magic sauce.  So here goes: “Black Belt” was innovative, insightful, with hysterically funny moments, delivered in a style that was authentic to Paul’s personality.

I was forced to miss it, but trusted sources told me Paul ter Wal’s “Becoming a Professional Speaker” was also excellent.  Toastmaster Marina Riedi quoted Paul while introducing us later, with this line from his workshop: “You can’t die with a book inside you.”  I had to pick myself up off the floor when I heard that.  Paul, who is President of Professional Speakers Association Holland, and Marina slapped me back to my senses, and a great conversation ensued.

And then there’s Bill Monsour.  He gave a clinic on how to chair a contest.  What a masterful job he did running the International Speech Contest.  Rock solid, yet with elegance and flair.  Bill, you da’ man!

Now here’s what really excited me about the Conference:  “Content” is back in the conversation.

Whether it was the surprising outcome of the contests, or the debates about the quality of the workshops, the “C-word” was coming up more than I had heard in a while around Toastmasters, which sometimes over-rewards dramatic delivery and over-looks content that moves people’s souls.

It’s long been my belief that, once you’ve defined your purpose and aligned the WIIFM with the audience, content should be the driver of any presentation.

Sure, you need to structure your material and provide context.  Of course, you must select effective visuals and deliver with impact.  But all of this needs to support the content.  Perhaps the presenter should be in the driver’s seat, but then content should be the navigator.

Presentations that are light on content and heavy on Shakespearian drama aren’t going to get you far beyond… well… speech contests.

A few years ago, this was my hot topic in Toastmasters circles: “Content is King.”  And just a few weeks ago, I submitted this as an article idea to the editors of Toastmasters Magazine.  They’ll give it a good look, on spec, and that’s cool by me.  We agreed that quotes from fellow Toastmasters would make for better, um, content, than me just waxing lyrically.

So I went to The Hague with a list of questions I would ask successful Euro-based Toastmasters, once I had delivered SBNW.  I was happy to observe that content was gaining traction long before I had even taken out my reporter’s notebook… in the hallways, during the coffee breaks, and especially at the bar… where we “reporter types” often get our best stuff!

I’ve got some good quotes, and I’m awaiting some follow-up quotes.  I’ll be scribing my submission in the next couple of weeks.