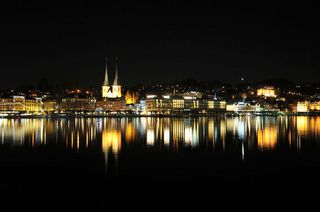 This weekend I attended one of my networking community’s Christmas parties at one of Luzern’s more established upscale hotels.

The club’s president had given me several dinner choices the week before by email, and I started looking forward to the event.  The “brand expectation” for this hotel, in my own simple mind, bordered on elitism yet also high-quality.

Then, four days before the event, I received an email from the club president.  The hotel had contacted her and said that only four people had chosen the Lemon Curry Chicken, so they would not prepare it.

It was the only white meat on the menu, but that wasn’t what let me down.  I certainly understand when I order a dish at a restaurant and they tell me they’re out of it.  C’est la vie!

But to say, a week in advance, “Not enough of you have ordered one of the choices we offered, so we’re not going to make it for you,” essentially tells me that they don’t think I’m very special.  They don’t think… I’m worth it!

I arrived at the dinner half-expecting and half-hoping for a less-than-top-class, brand experience.  My expectations were fully met.  The “Wow! Factor” was only a negative one.  Several things happened in which the hotel sent me a clear message: “You’re not very special.”

Were my expectations what tainted my actual experience?  Am I an unreasonably demanding customer?
Or, in the Brave New World, with even mass market brands trying to find “mass customization,” is this elite establishment missing something?
Are there lessons to be learned here?