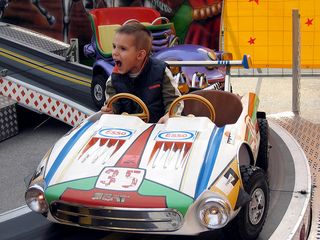 Last week I was driving home from work… along my normal route… within my local community… minding my own business.

Something caught my eye in the rear-view mirror.

Junior pulled up along side of me in the left lane as the traffic light turned red.

I looked at Junior with a smile, and made three successive hand gestures… the number “3”… followed by “2”… followed by “1”… and then I mouthed the word “GO-O-O!”

Junior fired back a single gesture… with a single finger.

I smiled again at Junior’s unbridled testosterone, which only made his finger move closer to the passenger window.

And that’s when I saw it.

Junior’s car was all branded up with a nicely-designed company logo, complete with website address and phone number.

When the light turned green, Junior tore off in a fury, weaving in and out of traffic… in and out of… potential customers.

When I got home, I went online and checked out the URL.  Sure enough, the sole proprietor’s prominent photo was that of Junior.

Junior the Caterer, hoping to cater your party… after he cuts you off in traffic and gives you the finger, of course.

The amazing thing is how frequently this happens.

Of course, we rarely notice when nice driving happens… unless we’re the one doing it.  And therein lies a secret.  Drive nice, feel nice. That’s right!  Being nice to pedestrians and other drivers actually brings you a more positive inner vibe, during the journey and when you arrive at your destination — be that your customer’s office, your office, a lunch meet-up, home, wherever.

I’m a New Yorker, so it would be a stretch to say I’ve always been the nicest guy on the road.  But ever since living in Switzerland, the local etiquette has been contagious.  (O.K., there are a few Juniors around.)

I now stop for the guy who’s trying to pull on to a busy street et al.  And I never, ever, regret it.  In fact, I always get more fulfillment out of gestures like that than what it actually costs me.  Three seconds is not a lot to invest in my own karma.

It also makes good sales and business sense.  Your energy will be more positive and you might be closer than you think to your next customer.  We can’t be perfect all the time, but try it in your real critical business excursions.

Rule 1: the closer you get to your client’s office, the more polite you should be.

It will lift your attitude when you need it most, and you may just “bump into” your client.

John is one of the nicest salespeople I know.  A decade ago, he flew to a small city the night before a series of final interviews at corporate headquarters.  After checking in to his hotel, he wanted to go out for dinner and get a feel for the town.

As he pulled into a parking space, the driver of another car wanted the same space.  John waved the other driver into the space.  For a brief moment, the other driver paused and motioned back, but John just smiled back and drove on down the street.

As fate would have it, when he walked in to the restaurant, the other driver and his wife were inside.  They gave a friendly wave and, before long, a conversation started.  In the better light, John realized the other driver was was the CEO who would be among those interviewing him the next day.

John was offered the job.  He turned it down while leveraging it into an agency representation role instead, which was riskier but turned out to be more lucrative, and had been one of his long-term goals.

Do you have any juicy stories like this?
Know anyone who’s won or lost a piece of business from behind the steering wheel?
Do you notice how your driving “karma” impacts your first few minutes at a business appointment?