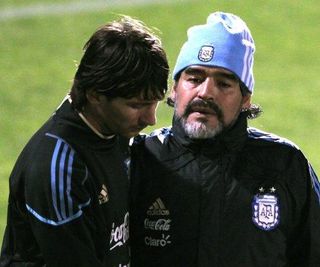 I rarely change my opinion of superstars from one day to the next.

But yesterday it happened in a New York Minute… or maybe, in a Maradona Moment.  My attitude toward Diego Maradona changed in the course of two or three minutes.

I had really come to dislike Maradona over the years.  He had decayed from a superstar to an insulting, drug-abusing slob.  Cameras, microphones and high-profile moments be damned, loud-mouthed Diego is going to give you a piece of his mind.  (Shall I mince my words?  Nah.)

One word you would not associate with Maradona is “discipline,” and that is a word I associate with high-performing sales managers and team trainers alike.

So it was with a chuckle that I learned that Diego Maradona would lead the Argentine national team as its trainer in FIFA World Cup 2010.

I can still hear the cynical voice within: “Maradona?  Hah!  Argentina doesn’t stand a chance!”

Then World Cup started and los Albicelestes looked solid in their 1-0 win over Nigeria.  But my “Maradona Moment” was still waiting to happen.

Yesterday afternoon, when the Argentina-South Korea match coverage started, Maradona came out of the team locker room and stood in the narrow passage way leading to the pitch.  He looked understandably nervous before his team’s second World Cup match, and uncomfortably overweight in his tailored suit.  He paced back and forth for a full minute before his players came out… one-by-one.

And one-by-one, he hugged them… and kissed them.  And they hugged him… and kissed him.  A few of the players put their foreheads against his, closed their eyes and meditated for a moment, then walked toward the pitch.

Hey, I’m totally comfortable with the whole latino thing of men hugging.  That’s not the point.  This was almost… spiritual!  (Maybe it was entirely spiritual, Buddha, and I’m still wrestling with my own enlightenment.)  One thing was for sure.  It was… profound.

Of course I’ve seen coaches hug players before — usually at the end of a game, after an exciting victory or a disappointing loss.  But I’ve never seen this much… love… before a match.

And so the match started.  And Argentina played brilliantly.  As one reporter put it, “Argentina were smoothly into their smooth-passing style, switching the ball quickly to their creative talents.”

What’s this got to do with selling?  Nothing.  Sales management?  Everything.  It’s all about talent management and performance.

In his book, “The Zero Turnover Sales Force – How to Maximize Revenue by Keeping Your Sales Team Intact,” Doug McLeod writes that the highest performing sales managers are honest, supportive, respectful and attentive to their team.

“As sales managers, do your salespeople like you?” McLeod writes.  “Be a leader, not a manager.  Be sincere.  Develop and maintain meaningful relationships.  To gain your salespeople’s respect, show that you respect them.”

An old sales and marketing guy once told me that his greatest leadership experience — and his greatest sales management accomplishment — was around a grueling project in which the small team had to pull together, negotiate with common interests and close high-ticket deals.  They all grew very close.  They all knew and respected each other’s strengths and weaknesses.

Years after the project had finished, the old vet was having a drink with the youngest member of his former team and the latter’s fiancee.  They got talking about the special vibe the team had, and the word “love” came up more often than would make many sales managers comfortable.  Maybe it was because the fiancee was there and their wedding was approaching, but that vibe filled their corner of the bar again as they reminisced.

While you may not have a love fest with each of your salespeople, you can certainly get more out of them by building your relationships.  Hire good people, then nurture them.  This is true in any team’s performance.  “Tough love” can go a lot further than pressure, pressure, pressure, which often leads to burn-out.

Maradona will still have his bad-mouth moments.  He may forever lack the social graces of many managers and even decent human beings.

But he’s got a deep connection with los Albicelestes.  He’s managing their talents, and he’s getting exceptional performance.  While it’s still too early to predict which nation will go home with the World Cup, Diego Maradona has found his groove in leading a team, even if it is for a moment.