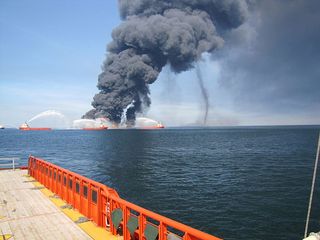 Necessity is the Mother of… DUH!

Necessity is the mother of invention, or so it has been said.

I don’t purport to be a rocket scientist, let alone a geologist or a fossil fuels extraction expert.  But am I missing something?

Don’t energy companies and governments have enough money and resources to think that this could happen?

If they have thought of this, have they not thought of a remedy for such a PR embarrassment into the millions, let alone a man-made environmental catastrophe beyond billions?  Where’s the pro-active innovation on behalf of the greater good?

So here’s a concept that I thought of while driving in my fossil-fuel-powered car just now, and I wonder…

… why no one has ever thought about it to the extent that they might do something pro-active about it.

Imagine an oil rig with a valve right at the sea floor that doesn’t crack when undo pressure is put on it.  In the case of a breach, with oil gushing out at a gazillion gallons and hour, this valve could be… imagine this… shut off.  And if that fails, another pre-fitted device could be lowered to contain it relatively quickly.  Sure it would be a big device, but don’t these companies enjoy fiscal quarters where they profit by tens of billions?

To this I say… DUH!  With so much money that could be spent on really necessary R&D, and with such a potential for major disaster, I don’t see a lot of brain power working pro-actively here.  I don’t see much innovation.  Innovation should not be limited to serving customers so that they spend money with you.  It should also be about protecting the population at large, even if only their neighbor spends money with you.  What about innovation for planet earth and the well being of all its species?  Isn’t this a necessity?

If my garden hose bursts, I can go to the faucet and turn it off.  If that fails, I can turn off the main to my house.  And the consequences are, let’s be honest, small.

If an oil rig bursts, the consequences are huge, and we’re helpless… and so is the planet.  Hello, innovation?  Is anybody home?