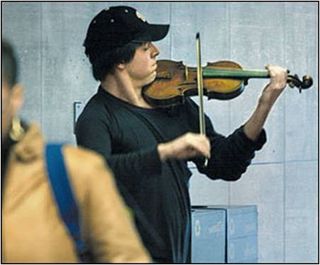 Positioning Matters, Even For Violinists

A friend sent me this photo with a short story this week.

I read it and saw some conclusions, but to me, it reinforced the importance of positioning.

You can have the greatest product in the world, but if you’re not positioned properly, you could be fighting an uphill battle out in the cold, hard marketplace.

At a Washington D.C. metro station, a violinist played the works of Johann Sebastian Bach for about an hour, during the afternoon rush hour.

Here are some interesting stats:

During this hour, about 2,000 people went through the station.

After three minutes, an older man noticed the violinist playing, but only slowed down for a few seconds and then kept walking.

At about four minutes, the violinist received his first dollar from a woman who threw the money in his hat, but hardly lost her pace and kept walking.

At six minutes, a young man leaned against the wall for a minute, then looked at his watch and walked off.

At about ten minutes, a young boy stopped and fixed his gaze on the violinist, but his mother tugged him along.  The boy pulled free and stopped to look again, but the mother pulled hard and the child continued to walk, turning his head back at the violinist until he was out of sight.

The action was repeated by several children, but each child was pulled on by his or her parents, without exception.

At 45 minutes, only six people had stopped.  Others had slowed to drop money in his hat, but continued on.

After one hour, the violinist stopped playing and packed up his violin and other belongings and left.  He had collected $32.

No one applauded.  There was no recognition at all.

No one knew who this violinist was.  He was Joshua Bell, one of the greatest violinists in the world.  He had played some of the most intricate pieces ever written, with a violin worth over $3 million.

Two days earlier, Joshua had sold out a theatre in Boston, at an average price of $100 per seat.  Everyone listened intently throughout the performance in Boston, and applauded at length, with a standing ovation.

The D.C. metro appearance was organized by The Washington Post as an experiment about perception, taste and priorities… and as I see it, about positioning.

The newspaper then raised several questions and reached several conclusions, which drew my own question:

Do we perceive value when it is out of context?