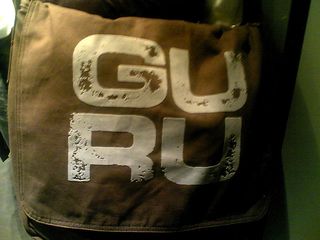 Social Media Advice – Take With A Grain Of Salt

There is no shortage of self-appointed Social Media Gurus in the Brave New World.  Unsurprisingly, to tell their stories and spread their gospel, they use… social media!

Most of the “advisors” I follow in this space achieved big things in Marketing 1.0 independent of Web 2.0, or they have a broad track record in various marketing areas.

Since social media is, essentially, one huge open forum, you have to take everything with a grain of salt.  Follow people for a while and then decide if their advice is worth taking.

This morning I saw a Twitter re-tweet to CNBC’s sports business reporter, Darren Rovell.  It linked back to Darren’s blog post My 13 Golden Rules of Twitter.

He opens his piece with how he managed to get 50,000 Twitter followers, much of it in the last year.  Darren explains that his large following is due to the fact that he listens to his audience and puts their comments into action.

You know what?  That’s excellent advice.  And being an old sports marketing guy myself, I also like Darren’s core stuff, his sports business reporting and insight.

However, and with respect, Darren missed a key point in his post: His success on Twitter is due primarily to his position as a media personality for the largest cable TV business channel in the U.S. much more than his Twitter best practices.

Remember when Ashton Kutcher reached a million Twitter followers in less than a week after a highly publicized bet with CNN’s Larry King?  Well, if that were you and me having that bet…

So, fellow entrepreneurs, consultants and start-ups in the Brave New World, have a read of Darren’s post.  I reiterate, most of the advice is solid.  Twitter is a great tool if you use best practices.  Just manage your expectations, and don’t forget that selling is still a contact sport.

Don’t expect to gain 50,000 followers in a year unless you publish a book or appear on Oprah… or get a reporting slot on reputable TV channel.