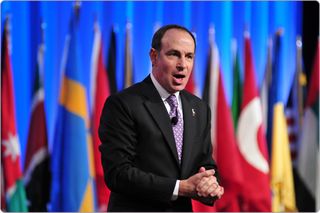 Toastmasters: Killing The Myth, One Speaker At A Time

Myth:  “Great speakers are born, not made.”

When my Toastmasters Zug club members asked me to be the Club President this TM year, I sensed the need and the opportunity to build a mission around some type of higher cause.

As Missionary-In-Chief, I’d surely be called upon to spread the Toastmasters word.

So why not kill a myth?

On Wednesday evening,  I was invited to the Swiss-Anglo Club of Lucerne to present Toastmasters to its members.

I could’ve opened with, “Toastmasters was founded in 1924.  Its first meeting was held in a YMCA in Santa Ana, California…”  (Yawn.)

So the driving theme, from start to finish, was “Killing The Myth, One Speaker At A Time.”

I mixed in a Table Topics session, explained the concept of manual speeches, held an interactive Q&A, and the whole thing lasted an hour, plus stammtisch.  I won’t bore you with the whole show, but if you’re interested, I excerpt the key points relating to mi misión below.

The good news is, several people said they’d like to check out our next Toastmasters Zug club meeting.  That’s the most a missionary can ask for.

To many people, this mission won’t be important, I realize that.  There is still hunger and injustice in the world, and we only have one planet that some treat like a garbage dump.  I’m not trying to be Bono or Bob Geldof or Al Gore.  (Maybe when I’m older!)

But to anyone who’s ever had to make a presentation to an audience of any size, the “great-speakers-are-born,-not-made” myth is simply… disempowering.

It wreaks of:  “Some people are natural-born speakers; the rest of us will never be.”

How disempowering is that?

Don’t try to sell the myth to Pat.

Pat was the volunteer Chairman of a major sports event organizing committee.  He was also the CEO of a corporation headquartered in the host city.

The organizers had many reasons for tapping Pat as Chairman — among them, he was a powerful speaker.

He could inspire.  He could entertain.  He could persuade.  He had most of the tools that make a great speaker.

But he hadn’t always been great.  In college, Pat had a meltdown while presenting a project, and he vowed to never let that happen again.  So he joined a rhetoric club, and after college he joined Toastmasters.

Here was a great speaker that was made, not born.

The truth is, public speaking is a skill and, like any skill, practice makes perfect.

Those “natural” speakers may start with a little something more, like genes or environment.

But that’s just a head start, that’s not the finish line.  That’s not even the journey.

At an early age, they were simply “frequent speakers.”  They were practicing, even though they were probably not even aware of it.  They were learning by doing.

It’s the ol’ “How do you get to Carnegie Hall?”  Practice, baby, practice!

So you haven’t been born in to the lucky gene club, or the “three older brothers forcing you to speak up if you wanted to be heard” club?

A Toastmasters club is a kind of “self-help” group.  Fellow club members are on their own journeys, so they are always supportive.  Where you begin your journey is not an issue for other club members, nor should it be for you.

The bigger issue is, are you motivated to improve?  Join a Toastmasters club, and just do it.  Get constructive feedback.  Observe others.  Follow your Competent Communicators manual.  Just do it again.

I’ve seen new members nearly melt down in their initial “Ice Breaker,” and then substantially improve by their third speech.  And by their sixth speech, be completely comfortable.  And by their tenth speech, actually get a buzz from it.

I’ve seen this again and again, one speaker at a time.

I’ve also seen skilled speakers join Toastmasters and become fantastic after just a few speeches.  As skilled speakers, many of them had developed certain habits, though, which they never had the opportunity to break.

You can’t always try new things in a business pitch, but you can at Toastmasters.  It’s a safe environment to try something new, make adjustments, and then put it to work on-the-job or in social situations.

I say this from first-hand experience.

Last year, my niece and her fiance asked me to be the officiate at their wedding, a non-religious priest in a non-religious ceremony, of sorts.  My first reaction was, “What an honor!” and I gladly accepted.

I put a lot of preparation into it, but as the date drew near, I started getting nervous.  If you blow a presentation, normally you bear your own consequences.  Blow a wedding ceremony, and the bride and groom bear the consequences, too.

Oh, man!  What had I gotten myself into?

Their wedding was on a Saturday, in our hometown along the Hudson River of New York State.  I would fly home on the Wednesday before.

And on the Monday before, I had a Toastmasters Zug club meeting.

So I asked our club’s VP Education if he could put me on the agenda for 25 minutes, so that I could run through the ceremony.  He totally supported me and.  He thought it was a fun idea.

At the meeting, I presented the flow of the ceremony and delivered my material from start-to-finish.  A few club members even stepped up and simulated the roles of friends and family who would do readings during the ceremony.  We had a blast!

When I finished, the club members gave me generous feedback.  We went over my allotted 25 minutes, but everybody agreed to it because they could see this was important.

And while we were simulating, I found a few things on my own that didn’t feel right, that definitely needed tweaking.  That’s a lot better than discovering them in front of the “congregation,” with the bride and groom’s big and loving eyes right in front of you, looking for… leadership.

That’s what I saw five days later.  Two sets of happy, excited eyes following every word I said, and a hundred or so more sets of eyes… and ears… behind them.

There were many, many things that made that day special to me.  And I’d be lying if I said that my contribution wasn’t one of them.  It felt wonderful.  Most importantly, the bride and groom were very happy with it.

Yeah, several guests said, I was “a natural.”

I appreciated that, but I knew… they were wrong.  They believed “the myth.”

I won’t give Toastmasters all the credit.  I put a lot of time researching how to officiate a wedding, thank you amazon.com and google.  I wrote most of the “script.”  I looked out the plane window much of the flight, envisioning and rehearsing.  But doing it with real people and in front of real people who gave me feedback, before actually doing the real deal, may have saved me.

Yeah, the real deal came off smoothly.  But don’t confuse “smooth” with “natural.”

How do you get to Carnegie Hall?  By dispelling the myth.

If you’re in Central Switzerland, swing by Toastmasters Zug some Monday night.

If you’re anywhere else, check out Toastmasters International.