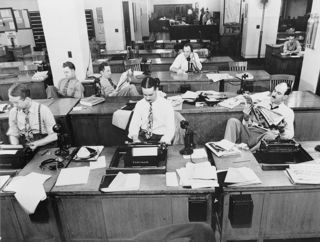 I’ve never, ever regretted starting my career in journalism.

The Newhouse School of Public Communications at Syracuse drilled some solid lessons into my head.  Most of them apply far beyond feature writing and into business writing and public speaking.

Sure, I still struggle while in the middle of writing something important.  I still stare into the abyss and, eventually, hear that whisper in my head, the journalist.

Then… along comes Twitter, and the challenge is amplified.  Tweeting well is a pretty intense discipiline!

I have to admit, when I first heard of Twitter, I laughed.  “Facebook for Dummies,” I thought.  I wasn’t alone.

It was about a year ago that I discovered what a great complement Twitter is to blogging.

It was about six months ago that I realized what a great source of ideas Twitter brings.

But it was about a month ago that I identified what really floats my boat about Twitter… as a writer of everything from business proposals to blog posts.

Yep.  I sometimes struggle with posting quality tweets.  Content isn’t my problem.  Brevity is.  Brevity actually helps you find the crackle, the pop.

And that’s the big point here.  The Twitter workout is a good one, not just for me, but for anyone who ever writes anything, especially salespeople and entrepreneurs.

Clients, stakeholders, investors, employees… they’re all busy.  Everyone is bombarded with information.  The Twitter mindset helps you cut through the clutter.

Good editors continually push their writers to keep it brief.

On Twitter, you have no choice.  You have to think like an editor, lest your tweets have no impact or… simply don’t fit.

Brevity means cutting the crap and going for the soul.

As Shakespeare said, “Brevity is the soul of twit.”  (OK, so I’ve editorialized.)

Not so fast!  I should also leave space for the link, and I should leave about 20 spaces to facilitate re-tweeting.  Imagine, 110 characters!

Thanks, Twitter.  Because of you, my work isn’t finished.

– So… how would you entice others to read this post, in about 100 characters?

Photo from the U.S. Library of Congress, via Wikipedia http://commons.wikimedia.org/wiki/File:The_New_York_Times_newsroom_1942.jpg