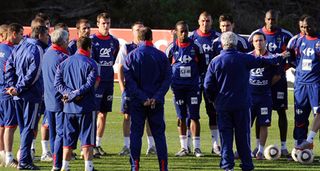 And now for the flavor of the month, la saveur du mois: French footballers at FIFA World Cup 2010.  What an easy target, right?

I’ll try not to write about their antics in South Africa being everything from childish to arrogant.  It’s really tempting, I must confess.

But amidst all the drama that Les Bleus put on display for the world to see, one tidbit stood out in my mind.

One of these French superstars quipped that he wasn’t getting paid enough.

As an independent consultant in the Brave New World, I couldn’t believe it.  But you read it right: one French player said that he wasn’t getting paid enough for his participation in World Cup; that it wasn’t worth all the grief.

(I know, I know.  I can’t get away from the childish thing.  Did I mention arrogant?)

Did I mention entrepreneurial?  Entrepreneur.  It’s a French word (just in case Dubya is reading).  And Les Bleus are anything but entrepreneurial… especially the aforementioned “Enfant-Who-Shall-Not-Be-Named.”

Entrepreneur: one who identifies an opportunity, takes an inherent risk, and organizes his/her resources effectively to achieve a profitable outcome.  Entrepreneurs seize the day.  It’s a trait needed to survive and thrive in the Brave New World.

“But Blue Boy is a millionaire,” some of you might be noting.  “So why should he take any risk?”

I’m not asking him to.  I’m only suggesting that he’s not the brightest bulb in the entrepreneurial chandelier.  He certainly hasn’t seized the day.  In fact, he’s probably awakened rudely the last few days to discover that he blew the day.  His value is plummeting.

Good ol’ Blue Boy and amis are seeing their sponsorships and endorsements tank in front of their very eyes… during the World Cup.

If I were their agent, I’d be kicking some superstar ass, some cul bleu!  (On that note, where were the agents during this comedy?  Alors, messieurs.  Dormez-vous?)

To say, “they’re not paying me enough to play in World Cup” a) is ridiculous, and b) shows complete ignorance of the distinction between cash and value.

Any entrepreneur would realize that playing in FIFA World Cup is a value-add extraordinaire.  Sports fans around the world – and sponsors around Paris and other world capitals – perceive your value to be higher if you’re prominent at an event like FIFA World Cup… unless you’re prominently childish… or arrogant… or behaving like you’re down before you’re even out!

To the Boys in Blue: While you may not give a toss about your country, your compatriotes, or the beautiful game that feeds you, wake up and manage your personal brands!

To those Brave New World start-ups, independents, consultants and, um, entrepreneurs: Seize every opportunity to be prominent, and to be seen as giving.

A friend of mine recently jumped at the opportunity to speak at an industry conference, without fee… sans honoraire.  The conference organizers offered to pay his flight and hotel.

My friend seized the day and politely asked, “Well, in view of no fee, can you guarantee that I won’t speak right after lunch?”  No problem.  They discussed time slots and he got the one he preferred.  You can bet that mon ami did everything in his power to give a fire-cracker of a presentation.

And in the Brave New World, it’s also how they know you.

The Boys in Blue obviously don’t get it.  They’re either naive or enfants arrogants.  They’re certainly not entrepreneurs.