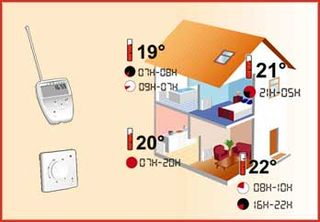 Sell The House, Not The Thermostat

My brother Tom is a successful real estate broker and an awesome salesman, at that.

One of the things I’ve most admired about his sales talents is his focus on keeping things simple in the minds of buyers.

As his business expanded over the decades, he had to scale. So he hired salespeople. One of them, let’s call him Roger, had a lot of hope.

The guy was bright, personable and articulate… and “articulate” was actually his curse. He just couldn’t get prospects to the second stage of a sale.

So Tom went out with Roger on one home visit with a couple, prospective buyers, and it took Tom just a few minutes to identify Roger’s biggest obstacle.

“You know why you’re not selling, Roger?” Tom started as the couple drove away. “You’re too intellectual.”

“When the wife asked how the electronic thermostat worked, you gave her a seven-minute dissertation on how it was designed, with a full appendix on how the entire heating system worked, from the thermostat, to the fuel oil, to the hot water, to the pipes running through the house.

“I could see it in her eyes. You scared her, man! She thought she was buying the Space Shuttle.”

Roger resisted. “She wanted to know about the heating system. What would you have done, ignored the question?”

What Does The Buyer Really Want To Know?

“She didn’t ask how the entire system was designed,” Tom retorted. “She asked how these new electronic thermostats worked.

“Sell the house, not the thermostat. Sell the lifestyle!”

“So how would you have answered?” Roger had taken the big step from resistance to curiosity.

“Like this: ‘I bought a similar thermostat for my house last year, and I love it. It’s really easy and it’ll save you time and money. In the winter, you can set the timer, like this, so that a half-hour before the family wakes up, it automatically starts warming the house. And then, like this, so that the heat goes down about the time you typically go to bed. I really love mine.'”

“Then,” Tom continued, “they would’ve felt they were buying something easy and modern… instead of some mysterious, complicated system that will require a lifetime of electronic and hydraulic maintenance!”

Roger had just learned his biggest lesson in sales.

Over the next few months, he brought home buyers successfully through their buying cycle — by keeping things simple.

What About You? Are You Impressive or Effective?

Are you over-complicating things in your prospects’ minds?

Don’t assume that your prospects want to go complex… until they ask for more detail.

Until then, and even then, keep… it… simple.