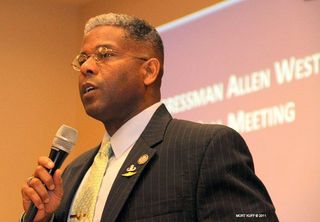 Selling By Influencing: Where Today’s Politicians Get It Wrong

I’m just back from the States, where the politics have gotten stupidly ugly.

No, this is not a political post, and I’m not taking a position here, but I do like to relate everyday events to the art and science of selling.  Today’s politicians offer a smorgasbord of how not to do it.

Last night, first-term Congressman Allen West was holding a “Town Hall” in his district, in Fort Lauderdale Florida.  A handful of voters interrupted him early on and started shouting questions.

West went right on the defensive.

“You’re not going to intimidate me!” West declared from the stage.  To no surprise, his supporters burst into loud applause.

But a funny thing happened after the applause died down.  The opposition only got louder.

The town meeting turned into a shouting match, and the guards were lightning quick to arrest the protestors.  An immediate victory?  Or a longer-term loss?

The incident has gained a lot of media attention.  Now, West and his party are on the defensive for something that, a week ago, had strong momentum in their favor.

And West is not alone.  Politicians on both sides of the American aisle are losing support by trying to win every battle, even with members of the vocal public.

West did what a lot of junior salespeople do when handling objections.  He got defensive.

As animals with tens of thousands of years of conditioning, we’re emotionally programmed to get defensive when anything threatens us.  A lion jumps out of the brush, it’s “fight or flight.”  Even if we flee in the modern-day sense, we insult the lion as we run.

But we have to overcome this when attempting to persuade the mental side of the human psyche, because your buyer — or your voter — is an emotional creature, too.  The “I’m right, you’re wrong” approach never works… not in personal relationships, public speaking, persuading or selling.

It’s the antithesis of consensus-building.  It’s counter-productive to influencing, and influencing is essentially where you want to be in sales and… I once thought… politics.

Getting defensive only makes your counter-part more defensive.  Unseasoned sales people make this mistake unwittingly, if not in the spoken word, then in body language and tone:  “I know this product is great.  Why aren’t you getting it?”

Imagine if, instead of saying, “You’re not going to intimidate me,” Congressman West would have said, “I know some of you here have concerns.  In fact, I did too when I first looked at this, so I think I understand where you’re coming from.  I have a perspective that should interest you, if you can give me a few minutes to point it out.  Can you give me that?”

As salespeople, we need to use consensus-building approaches like this all the time.  When a buyer shows some concern for some portion of your pitch, you must make it safe for the buyer.  You must demonstrate that you know where the buyer’s coming from, and that the concern is legitimate.

“If I were in your seat, Joe, I’d probably be asking the same question.”

Then will you have an open mind facing you, ready to listen to your perspective.

I’m pretty sure that last night’s Town Hall would have stayed civil if Congressman West would have used Tactical Selling 101: Handling Objections.

And I’d bet that West wouldn’t be the subject of headlines suggesting that he and his party are “up against the ropes” from angry constituents, at least not to the degree that they are this morning.

So when you’re face-to-face with customers, don’t try to win the battles.  You’ll only lose influence.

Handling objections and persuasion is not about hammering your point home.  It’s about building consensus and influencing.