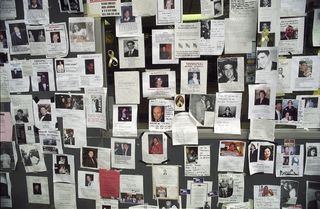 Perhaps they didn’t know anyone who was killed in the terrorist attacks of September 11, 2001. Perhaps they didn’t know anyone who survived because they cancelled a meeting in the World Trade Center that day. But they can tell you what they were doing when they heard the shocking, near surrealistic news. Many can tell you how 9-11 changed their lives in some way.

I had been living in Europe for years when two hijacked planes took down the World Trade Center, another slammed into the Pentagon, and another fell into a field in Pennsylvania while its hijackers were reportedly going for the White House.

Then, two months later, I flew to New York’s JFK Airport and drove a rented directly for my hometown, two hours north. I arrived home just in time for Thanksgiving, the most American of holidays, and this year, my homeland was feeling a lot of patriotism and going through a lot of reflection.

The purpose of my trip was really business, and on Monday morning, I took an early train back into Manhattan for meetings, arriving in Penn Station, like I had so many times before.

But this time it was different

Yeah, sure, my homeland had been hit by terrorism like never before. Yeah, sure, it had been a prolific Thanksgiving holiday with lots of thanking and questioning. Yeah, sure, everyone everywhere was talking about the tragedy.

But now I wasn’t just in my homeland. I was in the epicenter of 9-11. I was in New York City. Manhattan.

All around Penn Station, wherever there was a bare space of wall, even where there wasn’t, even over paid advertisements, there were flyers… posters… of the missing.

People had posted these flyers. Human beings… who were holding out hope that the loved ones they lost in the World Trade Center that otherwise gorgeous September morning would still be alive… that they would miraculously and literally surface.

I had seen these flyers on news reports. But now I was really seeing them. Everywhere. As far as the eye could see, accompanied by a strong smell of burned wire.  You could smell Ground Zero here in Penn Station, a couple of miles away.

Something took the wind right out of me. I burst into tears. And not quiet tears. I was sobbing out loud. This was just overwhelming and I just hadn’t anticipated it!

You think New Yorkers have a tough shell?

As I pulled myself together, I realized that a stranger, a cream puff, had his hand on my shoulder. It was there for what seemed a minute, yeah, a real minute, 60 long seconds, when I cleared my eyes, and said, “Sorry. Shit, I’m sorry.” I didn’t ask him why he stopped, or why he dared touch me. It was ok. It was… human. And New York City was more human than ever.

“Did you lose somebody?” he asked.

“No. Nobody… but this is my homeland… and I’ve been living outside of the country… and this is the first I’ve experienced this… and I can’t believe how deep the pain is here… and how wide. That’s all. I was numb. And now, even my pain is small. But everyone else’s? Shit!”

“Oh yeah. I’ll be fine. But all these people?” I motioned at the flyers.

“Yeah, they had a really bad day,” Cream Puff said. “But the people who put these flyers up? They’re the ones still living in hell.”

“God bless,” Cream Puff said. He smiled and started away, back to his somewhat normalized New York pace.

“You will now,” he said. “And it won’t be in the way someone else defined it for you when you were a kid, either. But you’re gonna’ start asking a lot of questions. Namaste.”

I started asking a lot of questions, and I still ask those questions.

No, this is not a blog about religion, and it’s not going to become one now.

But this is a blog about the human side of sales. Selling requires that the buyer does something different as a result of you framing things in the right context. Stories are a powerful way to put things in context, to impact people so deeply that they change behavior.

So here comes my change in behavior, followed by moral of the story. Here comes the essence, which is what a good story must have if it’s going to have any chance of changing the buyer’s behavior.

September 2001 changed my life. But so did November 2001. So did New York. So did Penn Station. So did Cream Puff. So did the questions.

Later that November afternoon in New York, after my meetings, I was on my way to the hotel and I passed a bookstore. I stopped dead in my tracks, then bolted inside.

For the first time ever, I found my way to the Religion & Spirituality section. An hour later, I left with two books, Religion For Dummies and The Complete Idiot’s Guide To World Religions, and a mental list of more books to buy in the future.

Until that moment, I was a dummy, a complete idiot, on the topic of religion. Here I had considered myself a culture and geography buff? How can one really know world cultures if one does not know the world’s religions?

In the following two years, I read about 30 books on religion and spirituality. Whether or not I became religious or spiritual is not the purpose of this blog, either. That’s a pretty personal thing, and it’s my own business, thank you.

What I will share with you is the fact that, on a mental level, on an intellectual level, I love the topic of religion. I love how my knowledge of the world’s religions complements my knowledge of geography and culture… so profoundly that I now see the world with different color lenses.

Something changed in me that cold November morning in Penn Station. Something persuaded me to do something differently that afternoon. Something sold me on the need to learn more about humanity, my fellow human beings.

I’d love it if you could write a few lines below, or on my Facebook page, on how 9-11 impacted you.