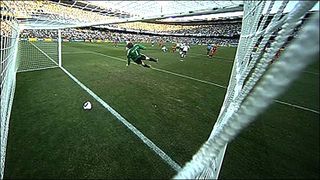 FIFA has certainly had a rough week.

The whole world took aim at football’s governing body and owner of the World Cup property, as FIFA staunchly defended its postion not to modernize the game’s officiating with technology.

But the core of FIFA’s woes go beyond its resistance to innovate.  The gap — between technology exposing referee errors and being used as a tool for effective officiating — is actually a chasm.

And, in the Brave New World of transparency, one gap usually creates another one.

Sadly, for people like me who love the game and love World Cup, and who also know how difficult it is to initiate change within sports governing bodies, FIFA has become a case study in “the brand-product gap.”

FIFA’s core brand value and its product are out of alignment.

A few years ago, a self-appointed branding guru tried to convince me, “Products are secondary to brands.  Stop focusing on the product.”  He insinuated that brands were for the hip, and products were for the dweebs.  I almost lost my lunch on his expensive shoes.

Entrepreneurs and start-ups in the Brave New World must not heed such unwise advice; we can not afford such gaps.  If we make a brand claim and then our product does not deliver, trust will be breached.  As a not-so-guruesque-but-much-more-disciplined brand manager told me 20 years earlier, “When it comes to branding, it’s easier to give birth to a baby than it is to wake up a dead man.”  Trust is a hard thing to re-build.

FIFA’s inability to change (“Change?  Life is good!”) has unfortunately brought the attributes of the product face-to-face with the cornerstone of the brand: “Fair Play.”  The brand-product gap strikes at the heart of sportsmanship.  It begs the question, “Is ‘Fair Play’ just a slogan?”

Fortunately for FIFA, it’s in the comfortable position where such gaffes won’t cripple it.  A few million angry fans won’t stop the vuvuzelas, the samba, or the music.  Angry as they are, most of these fans will be watching World Cup 2010’s final match, and everyone of them will be back four years from now when World Cup moves to Brazil, especially if “their tribe” qualifies.

Simply put, FIFA is the only game in town, and not even Brussels can do anything about it.

Its fan base is a gift from generations past and irrational tribalism.  Last century, the world listened to World Cup on radio, then watched it on TV… and sponsors/advertisers have astutely filled their boots ever since, while filling FIFA’s coffers.

If you couple tribalism and an exciting plot to which no one knows the ending, you will have passionate followers, in spite of a few gaffes.

If only it were that easy here in the trenches!  Most companies have to watch their product’s performance in view of their brand claims every minute, especially in the Brave New World in which opacity is not an option.

In 2005, a journalist by the name of Jeff Jarvis bought a Dell laptop.  The laptop was hardly out of the box and Jarvis reportedly experienced one technical problem after another.  While it was easy to buy from Dell online, it was nearly impossible to get service from Dell online… or on the phone.  Talk about a brand-to-product gap!

So Jarvis started a blog called “Dell Hell,” and he ripped the computer manufacturer to shreds.  It spread like wild fire.  Within days, “Dell Hell” was being forwarded to tens of thousands of techies and laymen alike.  Everyone joined in the conversation… and Dell was hardly aware of it.

Dell became the poster child of an out-of-touch IT company at the very time that technology was enabling brands and consumers to connect almost intimately.  To little surprise, Dell’s market share steadily dropped, whether because of Jarvis, the blogosphere at large, or because everybody discovered the gap on their own.

Michael Dell did have the courage, however, to face the problem head on.  When he pulled his proverbial head out of the Web 2.0 sand, he actually hired Jarvis as a consultant to handle the company’s Web 2.0 strategy.  Together, Jarvis and Michael Dell took the company’s marketing and PR way beyond Web 2.0.

First they apologized.  But not one quick apology and everyone back to work.  They advertised their apology, internally and externally.  They then morphed the brand experience into one of transparency and “being in touch.”  Of course, the product… and the service… then had to deliver.  It worked.  Dell came back from the brink of… hell.  As Michael Dell learned, brands and products are inextricably linked.

In the Brave New World, say one thing and do another, and you’ll pay dearly.

And herein lies the lesson for entrepreneurs, start-ups and scrappy consultants like us.  Transparency rules today.  Brands can not be seen as mere window dressing.  The attributes of your product have to align with the values and expectations created by your brand.

Brave New entreprenuers can ill-afford to brush off this gap.  We have to be responsive and fast.  If not, we’ll either lose market share or become the dead man.

For good or for bad, welcome to the Brave New World.

Post Script:  Fast Company is among the many with recommendations on How FIFA Can Kick Bad Calls.  As always, they’re spot on.  It must also be mentioned that FIFA kept the wolves from the door earlier this week by announcing that they will “review” goal-line technology after the tournament.

And what about diving?  Unfortunately, no mention has been made of the most glaring fairness gap of all: “diving,” in which players try to gain an unfair advantage by pretending to have been fouled or exaggerating the severity of body contact, sometimes with Hollywood antics that spectators and viewers see clearly, while distracted referees don’t.  All too often, gullible refs see a diver (cheater!) on the ground in feigned pain and then penalize an “innocent bystander” opponent.

So in reality, these cheaters are often rewarded for their diving, and they are never penalized for it.  (“Hello?  Can I speak to Fair Play, please?  She’s not home?  When will she return?”)  The reality is that virtually everyonelaughs at the absurdity of diving, everyone is joining in the Web 2.0 conversation like this one, while FIFA does nothing.  Even Yahoo! has something to say about Soccer Cheating That’s Really Unsportsmanlike.

If football is to close this gap and really become a model of Fair Play again, FIFA must tackle the diving issue before even that of goal-line technology.  How often has the goal line really been a problem?  But diving is an epidemic!!!

It would only be fair for divers (cheaters!) to be yellow-carded, even if it’s after the match.  (How difficult  would that be?)  And any innocent player that has been the unjust victim of a diver (cheater!) should have his card withdrawn.

After all, Fair Play is… fair play.