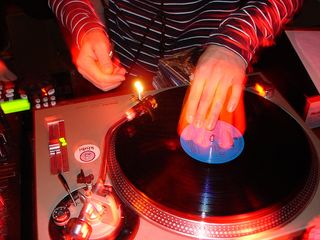 I was at a client’s company offsite recently, with over 200 employees brought in from around the world.

The first two days of the offsite started with hard work and serious breakout sessions.  Problems were being identified; solutions were being proposed; commitment was being secured.

Then, in the course of one late afternoon drink at the hotel bar, the attention shifted from serious work to outdoor activities… and serious partying.

The transition was highlighted by a gala dinner, and the dinner was concluded by a live DJ who was cranking up the music in the adjacent room.

I made my way in to the bar with people from my dinner table.  Some had been quite vocal: they were going to dance like there was no tomorrow.  Apparently, the expectation had been set by previous years’ offsites… and, personally, I couldn’t wait to see this group let its collective hair down.

But there was one small problem.  The music wasn’t quite up our street.  The DJ was guilty of a not-so-near miss.

Just because the crowd was professional, and just because the ages ranged from late-20’s to early 60’s, didn’t mean we didn’t like to party.  What it did mean was… Lady Gaga didn’t align with “customer needs.”

But that wasn’t the core of the problem.  What was happening here was that the DJ didn’t even notice, didn’t once look up… didn’t even care.

At worst, he was self-absorbed in his head phones and playlist.  At best, he was too busy managing his product.

Yep, as a businessperson, DJ Kiddo was unaware of the needs of his Brave New World customer.  He was product-focused, not customer-focused.

So I approached him with my iPod and a forced smile.  “Hey, man.  I know this crowd’s a bit older than your Saturday night crowd.  Do you think you could play a few songs from this playlist?”

He looked at my white hair as though I was the most uncool person he’s had a conversation with this century.  (Probably true, I know, but…).  He then looked at my playlist as though it was from Mars.  (Imagine, no Gaga.)

It took him a few seconds, but he got my point.  Baby Boomers want to be cool, too.  And the dancing wasn’t going to be too long-lived if the music missed its own beat.

DJ Kiddo not only took a few of my songs, but he flipped to another index, and, sure enough, had some stuff that even a white-haired guy from Woodstock gave the thumbs up to.

A few songs later, half the company was shaking its proverbial booty.

The balance of Kool & The Gang and Gaga’s Bench actually worked really well.  (Too bad it required a negotiation right next to the dance floor.) Compare this to a piece I saw recently about a piano player at an upscale hotel lobby bar.

Let’s call him Sam, yep, of Casablanca fame — even though this Sam plays in a New York hotel, and it’s 2011.

Not only is Sam a great pianist, he defines customer-focus.

As Sam plays, he scans the lobby bar and its patrons.  He picks out an individual, or a group.  Perhaps a couple catches his eye.

Sam gues-timates the couple’s age.  He then adds and subtracts to determine what year would they have been 18-years-old.  Sam then selects a popular song from that year, and plays it, with a little boost in the volume.

“Nine out of ten times,” Sam says, “you’ll see their eyes light up.  It’s a great feeling.  I can feel how I’ve made their day, or added something to their evening.”

Sam knows, intuitively or consciously, that it’s all about the customer experience.  As such, Sam is a “value-add”… to the customer and to his employer.

I hope DJ Kiddo learns this.  He’ll get more gigs if he focuses on the user experience, and not on his own playlist.

– Do you agree that it’s all too easy to become product focused, even outside of your typical B2B sales environment?
– Got any good examples?