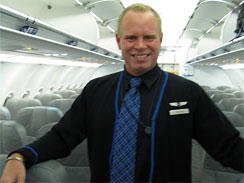 Having just come back from the good ol’ U.S. of A., I’m all caught up on local pop culture… and the latest of overnight sensations.

Perfectly timed with my departure from JFK was breaking news about the JetBlue flight attendant, Steven Slater.

Slater reportedly clashed with an unruly passenger throughout Flight 1052, taking a bump in the head from an oversized bag in the process.

The nastiness climaxed as the flight arrived at its destination, JFK, which happens to service the media capital of the world, New York.

So Slater grabbed the mike and announced, “To the passenger who just called me a mother
f—–, f— you!  I’ve been in this business 20 years, and I’ve had it.”

When the plane reached the gate, Slater grabbed a few cans of beer from the beverage cart and announced, “I’m outta’ here.”  He deployed the emergency exit, hopped down the slide, jumped over JFK’s security fences and took a cab home!

With many Americans either out of work or accepting declining conditions in order to keep their paychecks, it’s no wonder that Slater’s “take this job and shove it” performance in New York, New York has earned him folk hero status.

The internet is abuzz with Slater-mania.  A Steven Slater Facebook page is growing virally: 15,000 followers by Tuedsay and 120,000 by Thursday.  You don’t need a crystal ball to see that this saga has Saturday Night Live and talk show circuit written all over it.

Good for Slater if he gets a savvy agent and milks this one all the way to a book tour.  In fact, given where he is today, I would advise him to do exactly that. But the Brave New World messenger in me is going against the popular tide on this one.

No, I’m not going to shout, “He could have hurt somebody!”

Instead I’m going to shout, “Customers deserve better treatment than that!”

I’ve been an airline passenger more times than I care to count.  I once saw a surly flight attendant growl at a passenger for requesting a second cup of coffee.

The attendant stomped away down the aisle… obviously with more important things to do.  The coffee was never served and the passenger was never acknowledged for the rest of the flight.

Some passengers are indeed unruly, and I’m not going to defend them.  But a customer is a customer, and a flight attendant is a customer service rep.

There are best practices for handling jerk customers, and I’m betting 20 bucks that Slater’s best practices on Flight 1052 came down to, “It’s all about me.”  (Stomp, stomp.)

Such high-profile antics might get the average worker or start-up entrepreneur a spot on Good Morning, America.  But I’ll bet another 20 bucks they won’t 999 times out of 1,000.

And 900 of those times, if you manage customers in the Brave New World the way Slater did on Flight 1052, you’ll lose business faster than you can open an emergency exit.

I won’t list the ten best ways to handle unruly customers.  I will say, “Don’t try this at the home office!”

Worship your customers.  Handle the difficult ones tactfully.

Put up with a little grief and take the high road.  Don’t play victim.

If you really, really need to… blacklist a crappy client… quietly… but don’t make it all about you.

Which brings me back to Slater.  It’s not about you, o.k., Slater?  It’s about your customers.

If you ever start up a business, I highly recommend you leverage your folk hero status (if it endures) and leave the day-to-day management to somebody with a customer focus mindset.

And if you ever consider sales, well, resist the impulse and move on quickly.  Navel gazing might be more your style.

Milk this moment in the sun while you can.  It won’t last long.  You’re just a flash in the proverbial pan.

Beyond that, “See ya’ later, Slater!”  You’ll never be the role model for Selling in the Brave New World, although something tells me, you’re probably not motivated.

Post Script:  The Wall Street Journal has quoted two Flight 1052 passengers who claim that it was Slater, and not the passenger in question, who was out of line.