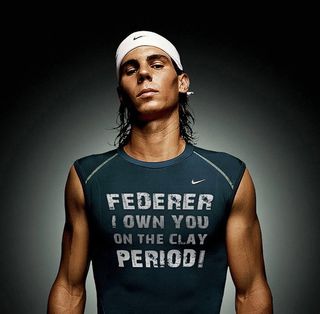 … but yesterday’s men’s final at Roland Garros was beautiful.

Nadal and Federer, on clay, in early summer, in Paris.  Poetry.

But you know what I like most when I watch Nadal and Federer battle it out?

Knowing that, off the court, these two guys love each other.

Sure, on the court, they want to crush the other guy as viciously as possible.  But off the court, in and around their busy schedules, Rafa and Roger hang out.

They also know — and appreciate — that they each bring value to the other.  Yep, real, live commercial value!

Why should your business be any different?  After all, business and sports are all about performance and winning.

Business Is A Deeply Human Endeavor

Spiritual teachings have been saying it for millennia: “Honor Thy Enemy.”

This is competition, so… compete… and do so viciously!

But hating your competitors is just plain stupid.

It’s also easy to dismiss them.

Over the years, I have had many good laughs with my competitors at bars, at events, at conferences, even in reception at prospects’ offices!

And I’ve materially, yes, materially, benefitted from some of these relationships.  I’m not alone.

You’re more likely to get a phone call from a former competitor than you are from some unknown prospect reading a trade journal listing… provided you haven’t been an asshole, of course.

They have chosen the same line of work as you.  They can’t be that bad!