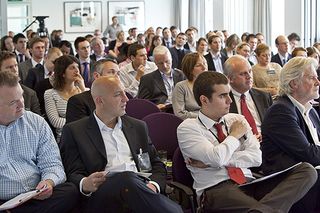 Speaking at a Conference? 8 Tips for Industry Leaders

I returned from a major industry conference two days ago

Was I disappointed!  While the networking was good, the presentations overall were… average.  And “average” is so far below the potential of anyone who speaks at a conference.  Brave New World entrepreneurs must seize opportunities like this big time!  Yet time and time again, the vast majority of conference presentations fall in to the abyss of meaningless… boring… forgotten.

Indeed, there were a few diamonds in the rough.  A few industry leaders actually cared about their presentations.  They not only prepared well, but they executed well.  And they made a big impact.  They strengthened their own personal brands and maximized their lead generation.  Could this be one of their secrets…

… to earning their roles as industry leaders?  I have no doubt!

The vast majority of presenters, on the other hand, squandered a huge opportunity!  They — and their presentations — were a lackluster average.  Two days after the conference, I can’t remember what their big ideas were, or even what their topics were.  More critically, they squandered the opportunity to generate leads from the conference.  If they generated leads over the two days, it wasn’t a result of attendees storming the stage after their presentations.  Today I not only don’t regard them as industry leaders, I’ve forgotten them.

Speaking at a conference is a golden opportunity to accomplish what entire marketing departments die for: lead generation and brand building.  Don’t squander it.  Capture it!

Here are eight tips for getting the most out of this opportunity:

On the other hand, isn’t knowing that you nailed it, that you delivered big, that your slides led them to following your every word, that every word was crack on, that people took note of your edgy message, and they took your business card, and you took theirs, and you have a reason to meet next week… isn’t that what you want to achieve?  Isn’t that worth it?

Don’t leave it to chance.  Industry leadership is not easy.  It has to be earned.  If you are so fortunate to be granted the stage at any public speaking opportunity, let alone a conference in your industry, seize the day.  Knock ’em dead!