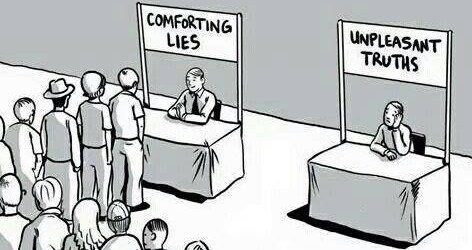 The Most Courageous Sales Question To Ask A Prospect

It was in the lobby bar of a Miami business hotel where I wanted to kick my project partner. He had asked a question that I thought would jeopardize the deal. I soon found out, however, that it was the most effective sales question to ask in this situation, and a courageous one, at that.

The moment he asked it, I think I stopped breathing for a few seconds. But I kept my game face on, stayed focused on the prospect, and noticed the prospect’s body language relax.

He breathed a sigh of relief, signaling that getting the real nitty-gritty out in the open would indeed be best for everyone. He seemed thankful that my partner had opened the door for him to do so.

The conversation constructively transitioned into a) where we had missed the target, b) why we wouldn’t get what we were asking for (in spite of what he indicated in our phone conversations the week before), and c) what we would need to do in order to get something else.

That “something else” turned out to be a sweet consulting deal.

As rational as we humans believe our species to be, and as logical as we believe ourselves to be, we are run by emotion much more so than we like to recognize. Thus, we often avoid pain… by avoiding the truth.

It’s part of the human condition. The truth hurts.

In a sale, however, not knowing the brutal truth is often the biggest obstacle between you and a deal. Better to uncover the truth when you can manage it than to leave the pitch thinking you’re on your way to the Promised Land… only to struggle to get a return phone call, or to find a vague rejection in your inbox weeks later.

So here we were in Miami, pitching to be the TV and sponsorship marketing agency for a large sports event in Buenos Aires.

A month earlier, my partner and I had met the event’s CEO and CMO at a sports congress in Barcelona. Over the next few weeks, we had engaged in a few conference calls and exchanged a flurry of emails. Now we had flown across the Atlantic and were in the far corner of the hotel bar, looking out on South Beach and discussing various approaches to TV and sponsorship.

We had outlined our proposed solution, terms of engagement and the right amount of the usual stuff.  The Argentines reviewed our material warmly, positively and politely.

And therein lie the hidden problem between us and the deal.

And… therein lies the hidden problem between many vendors and many deals.

Prospects often lie — or don’t reveal the brutal truth — because they are actually trying to be polite.

Sure, some prospects can be vicious, but even the vicious ones often save the piss and vinegar for a real negotiation. If they’re not motivated to move forward with you, why invest the energy?

In the film, Hitch, The Love Doctor, Will Smith plays a New York dating coach with some pretty pathetic male clients, Albert among them. Albert explains some things that don’t add up about his love interest, Allegra.

So Hitch tells Albert about the paradox.

“Of course she’s going to lie to you. She’s a nice person!” Hitch insists. “She doesn’t want to hurt your feelings! She hardly knows you. What else is she going to say?”

It’s the same with prospects.

It’s easier for prospects to end the meeting with a smile, escort you to the lift and leave you with hope than it is for them to say, “Thanks for your hard work. You’ve missed the mark. Have a nice life.”

The salesperson, therefore, has to prompt the truth — the brutal, hurtful, painful truth — with one courageous (and effective) question.

“What’s the worst thing about our proposal?”

Prospects will admire your courage. They’ll also appreciate that you’re making it easy for them to tell you what stands between you and a deal.

In just about every sales training session that I suggest this question, at least one salesperson protests, “I couldn’t ask a customer that question! It focuses them on the negative!”

“Fine,” I reply. “I know it’s a courageous question to ask, especially the first time. But trust me, it gets easier after you’ve done it a few times and you see the benefits.”

“What could the benefits possibly be?”

“Well, let me answer your question with a question. Have you ever lost a sale and not known why?”

Usually this type of resistant workshop participant either cowers and tries not to answer, or shrugs his shoulders and quietly relinquishes. Other learning-ready salespeople openly admit, “All too often.”

Prompt The Concern. Handle The Objection.

Questions like this prompt the prospect’s concerns. It invites her to safely voice an objection.

Then you can use your “objection handling” skills (subject for a future post) to understand your weakness in this pitch and address what stands between you and a deal — right then and there — and perhaps actually win it!

I admit, back in that Miami hotel bar two decades ago when my partner asked, “What’s the worst thing about our proposal?” I initially wanted to kick him under the table.

But I kept my focus on the event’s CMO and noticed that the clouds seem to part as the truth appeared.

And the truth wasn’t so brutal, after all.

The CMO told us that the organizing committee believed in our expertise and found it extremely valuable. However, the brutal reality was that the local constituents back in Buenos Aires would never accept us outsiders as being the agents of record. Furthermore, to execute our plan, we’d have to hire locals to do the real selling in the territory of the event, which wasn’t efficient.

Knowing that not-so-brutal truth, we refocused the conversation with another question. “You’ve indicated that you find our expertise valuable. Could it be leveraged behind the scenes, not as a high-profile agency of record, but as advisors, as consultants?”

The answer was “Yes” without hesitation. We spent the next thirty minutes crafting the framework of a consulting relationship. As consultants, we would develop a TV distribution and sponsorship marketing plan, while also creating an agency selection criteria. In that same half-hour, we were even told the budget they had available for such consultancy.

We shook hands, and 30 days later had a signed agreement: a sweet consulting deal, with flights and two weeks on the ground in BA, and more consulting work in the pipeline.

When In Doubt, Be Courageous!

If things are going smoothly in a sale, don’t focus your prospect on the negative. But how often do things go smoothly from start to finish?

At any point that you sense doubt or hesitation from your prospect, ask the courageous question. Frame it in words that you’re comfortable with.

But don’t fall prey to staying comfortably ignorant of the brutal truth.

In a complex sale, prospects will be assessing your positives and your negatives, you can be sure of that. But if they’re not voicing the negatives, you’ll never know how to counter them.

I help sales teams improve their performance by putting the “love” into the sales process. The tools and techniques vary, but the mindset is simply a heart-set.

Let’s talk about love… and your sales performance. Contact me here or sign up for my blog posts on the top right. I won’t overdo the love. I only post about once or twice a month. So I hope you see the value and that I leave you wanting more.