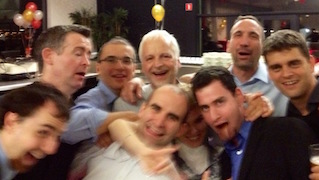 Why Toastmasters Is The Ultimate Tribe Of Tribes

If you’ve heard of Toastmasters but have never been to a meeting, forget what you think. Hang out with us for a bit, and you’ll see why Toastmasters is the ultimate tribe of tribes.

I often get approached at networking events by people curious about Toastmasters. “You’re really active there. What’s it all about?”

Before answering, I often turn it around. “What do you think it is?”

So, go ahead. Ask long-term Toastmasters what it’s all about, and why we’ve been at it for so long.

Our eyes will light up. You may even think we’re a bit crazy.

Thank you. We are.

It starts by loving our product.

Perhaps Toastmasters International‘s biggest branding challenge is the word “toast” at the root of the name. So why don’t they change the name?

Well, attracting new members is one thing, but maintaining the base is quite another. We love being Toastmasters.

And that love is powerful. Our love for the brand, actually, our love for the product, is Toastmasters International’s greatest recruiting tool: word-of-mouth from the tribe itself.

But as Toastmasters, we’re different, and we love it.

We have a mission that’s focused on personal development. It’s consistent from club to club and around the world. We’re one big self-help group dedicated to public speaking excellence.

Everyone contributes, everyone gives and everyone takes, and it’s all positive.

The core of the Toastmasters experience is your local tribe.

My club, Toastmasters Zug in Switzerland, meets every second Monday evening, with a networking dinner break in the middle.

Sure, we give speeches, but the topics are as wide as one can imagine, from strategy to spirituality.

Each speaker is somewhere along his or her own journey, with different objectives to achieve as outlined in the initial Competent Communicator Manual or one of a score of Advanced Manuals.

Each speaker is assigned an evaluator, who, later in the evening, provides open feedback in the form of a two- to three-minute speech personalized for the speaker.

We have an impromptu speaking session, called Table Topics, where each member is given a topic and must speak about it spontaneously for at least one minute.

It’s an evening with a lot of interaction, and I invariably leave with a warm buzz, high as a kite, and I’m not alone.

Every club member says the same thing.  We laugh a lot, we bring out the best in each other and, as lofty as this might sound, we feel a part of a higher mission.

And the tribe is one of many.

In the fall, we have the Humorous Speech and Table Topic contests. In the spring, we have the International Speech and Evaluation contests. It starts at our clubs. Then the winners advance on to the Area Contests, consisting of a handful of neighboring clubs, our extended tribe members.

The winners of the Area Contest advance on to the Division Conference which, in our case, is all of Switzerland. Here, members get together for an entire Saturday of workshops, networking coffee breaks and lunch.

The competition at this level is fierce. The quality of the speeches is sharp. The motivation of the speakers is almost obsessive.

The winners here advance to the European* District Conference, which, over recent years, has been hosted in cities like Lisbon, Barcelona, Vienna and Budapest.

In addition to the previous speech winners, about 300 freaks like myself show up for a three-day weekend of speech competitions, workshops, break-out meetings and a wicked gala dinner, with some wicked partying. (Photo above from Antwerp, spring 2013).

Like any family, we’ve seen hook-ups and splits ups. We’ve high-fived marriages and lamented divorces. We’ve had eulogies from the plenary at the opening ceremony, and we’ve had wedding proposals from the stage at the gala dinner.

We’ve laughed so hard that tears have rolled down our cheeks. We’ve cried even harder.

The winner of the District Conference’s speech contest goes on to the Toastmasters International Conference in August, where they get a shot at becoming The World Champion of Public Speaking.

I attended the 2011 International Conference in Las Vegas, not as a competitor, but as a member of the tribe. And I had a five-day blast!

When I first arrived, I didn’t see anyone I knew from my European tribe of tribes. Oh… I had that moment of doubt.

It lasted about as long as it took me to get to the registration desk, where I found myself chatting with some South Americans, who introduced me to some Asians, who caught up with me three nights later… on the dance floor!

This is the Toastmasters Holy Grail.

Outsiders find it hard to believe that speech contests can be so exciting. But try telling that to a Toastmaster as the speech winners are being announced, and you won’t get his attention. He’ll be dying to know who the winner is. We all will be.

We’ll be entranced. We’ll be savoring the pursuit of the tribe’s Holy Grail.

It’s all part of our brand, our product… and our ritual.

I love my tribe.

Photo by someone whom I honestly don’t remember. It was my camera. It was late… and we were doing our tribal thing.