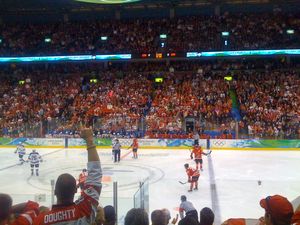 Sales and the Zen of Ice Hockey – The Fundamentals

Did you see the Canada-USA Olympic Ice Hockey Final?  Wow!  As in hockey, sales is all about the fundamentals.

But it wasn’t the goal alone that caught my attention.  It was the the give ‘n go.  Crosby passed the puck to teammate Jarome Iginla and instinctively broke toward the goal.  Iginla shuffled the puck right back in front of him, and Crosby slipped the puck past the U.S. goal keeper, into the net, all in a nano-second… and the entire country of Canada erupted in celebration.

What’s my point?  The fundamentals.  The give ‘n go is one of those things a Canadian kid learns right after putting on skates for the first time.

Selling, in some ways, is like most sports.  You can not call yourself a master if you don’t make the fundamentals such a part of your tool kit that they become instinctive.  That’s why Crosby is not only loved by Canadians for securing the gold, but why the kid is earning superstar status.

It’s not even about calling yourself anything — master, superstar or otherwise.  It’s about putting the points up, getting the sales, securing happy customers.  There are no shortcuts around the basics.  But there are rewards to using them every day.  Just ask Sidney Crosby.