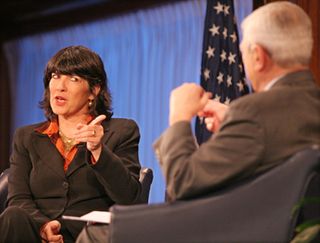 In spite of the headline above, I really do respect Christiane Amanpour.  Kind of.

She’s hard-working.  Driven.  Focused.  And she’s always well-prepared.  Waddya’know?  These are the traits of a good salesperson, too.

But there’s one thing that stops me in my tracks when I watch Amanpour’s interviews.  She doesn’t shut up.

(Pause.  I’m shutting up.  Giving you a moment to think.  Letting my last statement resonate a bit.  Seeing if you sell yourself on this point.  And I admit, I have to discipline myself to do this.  But then… I’m not Amanpour.)

OK, OK.  If you’re one of her die-hard fans, go find some footage to show me that I’m wrong.  Fine.  But for every minute of footage you show me of Amanpour letting her guests speak, I have two minutes of mental images of her pontificating and, yes, interrupting.

When I watch Christiane Amanpour, I get the feeling that she wants to be the news.  She wants her points to be known… even though she’s interviewing knoweldgeable and influential people!

In my mind, “Brand Amanpour” is not about getting the big story out of big people.  In fact, I don’t think of Amanpour as one who ever “breaks a big story.”  So it would follow that I couldn’t see her as the saleperson who’s going to land the big deal.  (Maybe she’d be the know-it-all in marketing.)

For me, Brand Amanpour has…

… access to big people, thank you CNN.  Brand Amanpour makes her point.  Good for her, but that’s not what I want in journalists when they’re interviewing movers and shakers… and it’s not what buyers want in salespeople in the Brave New World!

In Amanpour’s last month at CNN before moving to ABC, I was watching her interview a prominent religious figure in the Middle East.  She came armed with outstanding questions.  (Voila!  Another trait of great salespeople.)

But, true to Brand Amanpour, she rarely let the guest finish his point.  The guest was not filibustering.  He was not rambling.  His points were simply too deep to make in one sentence.  More than once, I sensed the guest was about to say something prolific as he started his third sentence.

Wham!  Amanpour would interrupt.  In doing so, she’d either miss the point or, worse yet, try to make the guest’s point her point.

“Shut up, Christiane!” I yelled at the TV.  My son looked up from his puzzle on the living room table.  Now I had an audience, too.  “Let the guy finish his freakin’ sentences!  Let him convince me.  Or let him crash and burn.  But let him speak!“

I wasn’t the only one getting frustrated.  The guest was, too.

Salespeople, do this at your peril.  It’s not about you.  Don’t play to the audience, even if the buyer is your audience.  Help the buyer… convince himself.  To do that, let him talk.

Last week, while doing an assessment, I met a very accomplished and astute salesperson.  A woman.  Blonde.  (She pointed this out.)  Blue-eyed.  If you’re thinking, “Duh,” think again.

“When a prospect takes something I’ve prepared and acts as though it’s his, or if he builds on my work and starts creating an even better solution, or if he wants to educate me on his project, I just blink my blue eyes and smile.”  (She paused.  I was waiting for her to flick her blonde hair, but she didn’t.  She just blinked.  And smiled.)  “I let him keep talking.  Usually by the time he finishes, we’re moving toward the next step in the sales process, or even toward a deal.”

Wise words.  Something a world leader might say… if only Amanpour would let him.