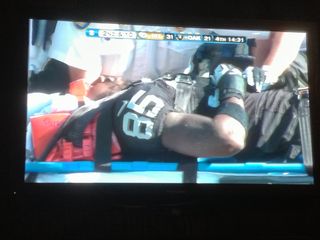 In case some of you do not follow American football, the NFL has started its season with replacement referees. The regular officials have gone on strike, and neither side is giving in.

I’m a huge fan of the NFL, and for decades have been saying it’s the best sports and television product in the world. Perhaps other products like UEFA Champions League can today rival this claim, but I still believe the NFL is awesome when it comes to its brand expectation and the product experience.

But right now, the American football world is losing yards. There is talk today that an agreement between the NFL and the referees is pending. Clearly the mood has changed after Weekend 3. Fans are going to social media, and one can only guess, broadcasters and sponsors are voicing their opinions behind closed doors.

The quality of the game is clearly suffering as a result of the replacement referees. The replacements are doing their best with their limited training, but it’s now to the point that the outcome of the games are being questioned, and the reason is glaringly obvious.

From Poor Calls to Violent Hits

Maybe you’ve observed it, too. The players have upped the severity of their “hits” on their opponents.

On Sunday night, Pittsburg safety Ryan Mundy put a such a vicious hit on Oakland receiver Darrius Heyward-Bey that my head was spinning, and I was sitting in a New York sports bar. Heyward-Bey’s head, on the other hand, was still… motionless for at least ten minutes, before he was taken off the field in a stretcher.

Replays showed that Mundy’s hit was a flagrant penalty. Hitting hard is fair game in the NFL. But driving your helmet up under the chin of your opponent is unsportsmanlike, dangerous, a clear penalty… and even grounds for ejection.

Mundy’s hit went unnoticed by the refs. No ejection. No penalty. No comment.

There was a lot of analytical talk about the referee situation after the first two weeks, but it was generally dispassionate and calm. But now after Week 3, vociferous bloggers and established sports writers alike are screaming, and they’re merely echoing what fans and viewers are saying.

As a marketer, there is now a serious gap between the NFL’s product and its stellar brand.

After three full weeks of play, words like “farce” and “circus” are flying around to describe the NFL’s product this year. This is not a good position for any brand. This is a dangerous branding gap, and a real business issue!

The NFL now faces “4th and long.” Will it punt, or will it go for the first down?

I love the NFL, but I won’t fight the masses, either. This mood toward the NFL and its once bullet-proof product has shifted. Its brand is on the precipice.

A London-based branding guru once told me, “A brand is an expectation of an experience.” I reminded him that the product itself also sets the ongoing expectation. We agreed that to create a brand whose product does not live up to the brand promise is a sure-fire way to lose trust.

And any product that lives up to the brand expectation before veering off course is in for trouble, as well.

When it comes to branding and reputation, “It’s easier to give birth to a baby than it is to wake up a dead man,” meaning, repairing a damaged brand is more work than creating a new one, all things constant. The NFL has the luxury of having decades of a strong brand and an amazing product.

So this is not a plea to the NFL, nor to the referees or their legal counsels. I am just one voice in the wind. I’m just watching business and interpreting it for entrepreneurs.

This Is A Two-Minute Warning. Don’t Punt!

This is a warning… to all those entrepreneurs, start-ups and established brands alike.

Does your product match your brand experience?

Are you staying on course with your brand promise, its messaging?

Does the delivery of your product match that promise?

Perhaps it’s business as usual for you, and your’re not noticing. Perhaps you once developed a brand platform, you got some clients, and now you’re delivering… and you haven’t really noticed that you might be drifting from your original brand promise.

For most start-ups, punting can be fatal.