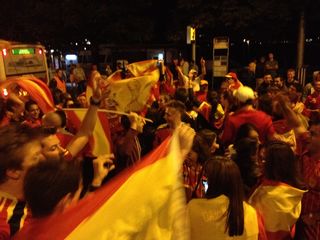 (And this has everything to do with sales and team pitching!)

There’s something beautiful about the style of football that Spain has been playing over the past half decade to win the most heralded trophies of the beautiful game.

It’s the same in team selling, but I’ll get to that in a minute.

Outside of Spain, the football/soccer commentators seem to overlook the incredible passing abilities of midfielder Andres Iniesta. In the Euro 2012 final match against Italy, many will remember the cross by Cesc Fabregas to David Silva at the left post, who headed Spain’s first goal into the net.

But it was Iniesta’s threader of a pass to Fabregas outside of the right post that made it all happen.

Ibid, Spain’s first goal against France in the quarter-finals. Iniesta threaded a perfectly weighted ball between two defenders to Alba who was making his way to the left post. Alba chipped a cross to Xabi Alonso for the header into a nearly open net.

After the matches, Iniesta probably wishes he’d get a little more glory.

But when I see close-up shots of the guy during the match, I don’t see a glory seeker. I see a maniac with an obsessed look in his eyes… an obsession that’s almost scary… an obsession for one thing: winning!

And although maniacal, he stays acutely honed on the tactical game. And Iniesta’s tactical gift… is passing.

This obsession is team-wide. As I posted on Facebook during the final Sunday night, “Spain are always on the lookout for the advantageous pass. Always! Only when the shot is the right thing to do, do they shoot. This is selfless teamwork at its absolute best.”

What’s This Got To Do With Sales?

What’s This Got To Do With Pitching?

When you go into a pitch with a team, do you want individual stardom? Or do you want to win the business?

Lone superstars can kill a pitch. Sure, excellence and competence is critically important. But it must be in a winning spirit for the team.

I wrote about this in “Sales Pitches that Snap, Crackle ‘n Pop”. While each teammate’s presentation has to be of superstar quality, it’s the small team things — like effective passing from one presenter to the next — that will show the prospect that they are engaged with a great team and, therefore, a worthy partner.

Your leadership, team harmony and depth will pay off big if you and your team transition smoothly from one teammate’s intervention to the next.

Phil Jackson was a pretty good NBA basketball player… and arguably the greatest NBA coach of all time.  He channeled the sometimes conflicting energies of superstars Michael Jordan, Scottie Pippin, Dennis Rodman and a bench full of other high-testosterone performers into a team that three-peated.  In the mid-90’s, the Chicago Bulls won three straight NBA championships under Phil’s leadership.

His 1996 book, “Sacred Hoops – Spiritual Lessons of a Hardwood Warrior,” is loaded with wisdom on teams, stars and human performance.

Phil writes this wonderful line in the book.  “If you meet Buddha in the lane, feed him the ball.”

On so many levels, a pass can be greater than the resulting basket.  It can also set up a slam dunk.  It’s the same in pitching.  Why not make your transitions pop?

Do not take this lightly.  Do not make it up.  If you’re going there to win the business, why leave even your transitions to chance?  The Chicago Bulls took passing very seriously.  You should, too!

It doesn’t have to be over-polished, but that’s no excuse for under-delivering.  When you see a fatigued TV reporter in a conflict zone, he doesn’t finish his report and turn it back to the anchor in a high-gloss, Fifth Avenue performance.  But he is rock solid because he’s thought about it and done it many times.

“Back to you in the studio, Fionulla.”

Same thing in a pitch.  When one team member concludes, he should not ramble.

Too often, a team member will present something stunning, or even pretty solid, but then not know when to sit down and elegantly shut up.

Instead, his eyes will glaze over and he’ll stray.  He’ll reiterate something from the middle of the presentation.  He’ll say something incidental that slips into his mind.  He’ll shrug his shoulders, say something like, “I guess that’s the end of my presentation,” and look to his teammates for affirmation.

Ugh!  He’s just rescued defeat from the jaws of victory!

Don’t ramble!  Have a rhythm to your segment’s ending planned, and pop it.

Know how you’re going to end.  Prepare it.  Say it a few times.  Now feel great about it and about the person you’re passing to.

Come pitch time, don’t make something up that’s obsequious and humble when, up to now, you’ve been warm but professional.

Do it according to a plan, and just do it as planned.  Pass the ball to the Buddha Boy with the chubby tummy and welcoming smile, and get out of his way.  He slam dunks the ball and you both set up for the next play to a roaring crowd.  You both know he couldn’t have done it if the pass were poor.  The karma’s good and momentum’s swung your way.

”… to be clear, we project at least seven percent returns above the market norm, through picking the right opportunities with GP’s who share our values, and by knowing when to exit.  (Pause.)  I’ll turn it over to Paula now, who will take you through some important research findings.  (Shorter pause.  Professional smile.)  Paula?”

You sit down and, initially your admiring eye contact is on Paula.  You then occasionally scan the buyer side with positive vibes.  You look back to Paula.  You’re not pining for compliments, you’re sustaining positive momentum for Paula, for your team and for your pitch.

Avoid talking with your other teammates to the extent absolutely possible.  Now is not the time to seek affirmation that you did a good job.  Assume you did.  And don’t you dare check your electronic devices.  What your teammate is saying is important!

On that note, if you are the one now presenting, you should be making eye contact with the prospect’s team.  Occasionally look at your own teammates, especially if you make reference to something they’ve presented or to an area of the business they handle.  Even if you make reference to someone else in your organization who’s not there, build an inclusive vibe by looking at your teammates.

If you pitch a lot, you and your pitch colleagues will soon get to know how you each handle your transitions, and you may even start to joke about how many times you’ve heard each other say, “Back to the studio, Fionulla.”

But it’s the first time the prospect’s heard it.  When details right down to your handoff are handled professionally, the prospect will start getting comfortable with you.

These folks seem to do everything competently.

Even the little stuff.

If you liked this chapter, there are 47 more short ones like this in the book.  You can find it at Orell Fuessli on Bahnhofstrasse in Zurich and The Golden Notebook in Woodstock NY. It’s also available on amazon.com and Kindle by clicking right here.