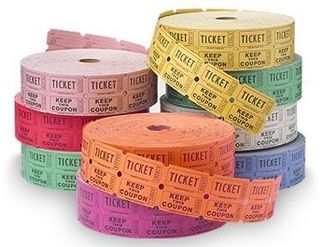 How To Get Leads: A Tale Of Two (Holiday) Raffles

Or… A Christmas Story

Just before dessert, the organizers held a raffle. The prizes were donations from whomever the organizers could beg, borrow and coerce, including party participants and their companies.

When the raffle was over, Company B’s manager was upset, while Company A’s manager had achieved her objective.

Why? Not because either of the managers held a lucky ticket. But rather because Company A got much more visibility from its prize donation than did Company B. Manager A was actually called up to to pull the raffle ticket for her donation after a brief introduction. She seized the moment and slipped in a few words of thanks… nothing too promotional, just gracious.

Company B’s donation was hardly mentioned outside of, “The next prize is a gift certificate from Acme Widgets.”

Keep Your Eyes On The Real Prize

I was recently asked by email to donate a copy of my book for a prize drawing to an event I was attending.

I replied by saying I’d be delighted, provided I could pick the raffle and say a quick word as I did so.

The reply was, “Thanks for your donation; sorry, our Master of Ceremonies has his plan for the drawing, and introducing people would be cumbersome.”

I didn’t accept this, nor should you. Event organizers holding raffles love prize dontations, so you have more leverage than you think. Why not make your donation conditional on a bit of visibility?

My phone soon rang from the organizer with a suggestion. “You can put your business card at the table in the entry.”

“That’s a low probability lead generator,” I replied. “In all my days in business, I’ve never had anybody call me after picking up my business card or brochure in the entry to an event. I get my leads by getting visibility, and then holding conversations that result from this. So I know it’s only a book, but I only give my books away for promotional consideration or introductions to quaified buyers.”

The organizer understood and called the Master of Ceremonies who begrudgingly accepted.

But here’s where it turned into a broader win-win. The organizers re-opened the topic in their final planning meeting and decided to let all prize donors who were in attendance pick the respective raffle ticket.

This made the raffle drawing a lot more fun for everyone, including the Master of Ceremonies, who now would have greater interaction between donors and prize winners.

In my case, I got to shake the hand of the book-raffle winner, and I also got a good lead from someone else in the audience.

I help companies market and sell more effectively. And I love to talk about the human side of business, so feel free to set up a phone call with my by dropping me an email at: jack(dot)vincent(at)focus360(dot)ch.